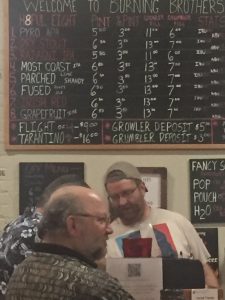 A visit to Burning Brothers Brewing in St. Paul, Minn.

Just paid my first visit to Burning Brothers in St. Paul, Minn. Their motto, “Don’t Fear the Beer,” is indicative of their gluten-free approach to beer-making.

According to their website, “We believe the only way to brew great gluten-free beer is to make it in a dedicated gluten-free facility. This means our beer is crafted using completely gluten-free grains, never containing wheat, barley or rye. We don’t use special filters, enzymes or other gluten-free gimmicks. Instead, we brew great-tasting beers that you KNOW are truly gluten-free.” 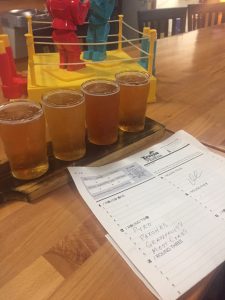 “Don’t Fear the Beer” — Burning Brothers is a gluten-free facility.

While I have had gluten-free foods in the past, I believe this was my first tasting of beer in this category. The result? Pleasantly surprised!

They were all drinkable. I think I liked the lime shandy best. I got a hint of a bitter aftertaste, so I want to re-visit this taproom when I have more time. They close earlier than many Twin Cities taprooms (10 pm, Wed.-Sat.). We arrived after 9:30 pm so we didn’t have much time.

I have not been overly impressed with previously sampled gluten-free foods. Using that parameter here, all samples were outstanding! I want to try them again when I can have a pint, so I can determine if they offer good gluten-free beer or more simply—great beer! Still, it’s good to know if I need to give up gluten, I can still drink a tasty beer!